Posted on September 17, 2017 by hamiltonstation

The visibility when out on the ocean varies from more than 10 miles to almost zero feet depending on the moisture content and dew point of the area. Sometimes, the fog condition can be dense on the water level and clear ten feet above or, visa versa. Fog can be wispy like smoke, or dense like pea soup. It can be sunny in town but gray and damp on the shore a few hundred yards away. Fog can lift in minutes, and come back in seconds. There are fog banks that sit out at sea – you can see their walls and ceilings from 10 miles away and watch them “come in.” From an airplane, usually in the morning, fog can be seen covering rivers, lakes and ponds adjacent to land that is fog free. As the day warms, those unique patterns can be moved by a gentle breeze, sliding sideways over the land and  exposing the water bodies from which they were created.  Low-lying fog is patchy; in front of a car windshield it can kill you if you fail to slow down.

Visibility and fog are in conflict, but perspective is another thing. While piloting a ship or small boat at sea, fog conditions 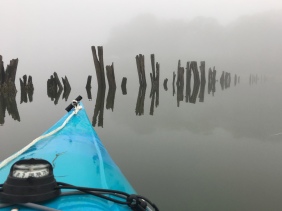 slow you down. But oddly, things look different when surrounded by fog. In the cove near my home a straight row of wooden pilings remains from an old earthen dam. But in the fog, in calm water, a short piling appears to be further away than a tall one since their reflections skew the data. Furthermore, the detail of objects that can be seen floating on, or protruding from underneath the surface in front of the foggy whitewashed backdrop,  is enhanced significantly. These illusions can be deceiving to even an experienced sailor when using them for navigation and piloting. However, the related perspective changes something else: perception.

Perhaps it’s the absence of so much more to look at, but that colorless, enormous fog background blanks out clouds, trees, rocks, mooring buoys, islands, birds, etc. Local objects that remain close enough to be seen in the fog, get more attention. Their details stand out, and the slower pace induced by fog provides more time for observing them. Perception changes under these conditions; the mind expands its attention to perception, observing in ways that otherwise might be overlooked. In a kayak on a bright sunny day, it’s tempting  to zip through that row of pilings, forging ahead to see an eagles’ nest or come upon a deer on the opposite shore. But restricted to nothing to view but the pilings in heavy fog, I find them the focus, easy to ponder. I wonder how, since being placed there in 1906, they survived over 70,000 tides, hundreds of collisions with tons of ice, and the bored in  attachments of millions of barnacles, muscles and periwinkles.  I admire the graceful sculpture of their lines, produced by nature’s weather and erosion. They even become icons of life’s larger barriers and beauty. Some pilings are submerged now, and are visible as you pass over them. Like subconscious realities they have an eerie attraction of their own. Colonies of microscopic creatures live there, requiring just the right ratio of water and air every 6 hours or so; how do they know to come here? Installed on a north-south axis, this row provides reliable direction and guidance, most especially in the fog. 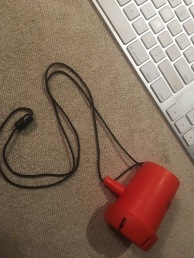 Could larger life follow a similar,  archetypical pattern? We prefer sunshine and predictability as we go about life, but it’s the mental funks that guide us. None of us seeks depression or anguish, but we realize that growth always comes through suffering and, grow we must. Unfortunately we need a few setbacks in life to slow us down, to rethink priorities. During those times when our efforts to be in control fail us, we can choose to view them as an opportunity to slow down, observe what would otherwise be ignored, and then actually celebrate the presence of fog.

Portable fog horn pictured above, useful for announcing the presence of a kayak to ships approaching in the fog.

I spent a few years as a small boat officer with the U.S. Navy in the Western Pacific, then worked 35 years as an automation engineer, followed by 8 years in a public high school as a special needs educator, 3 years as a kayak guide for a cruise ship on the Great Lakes, and currently in my 10th year as a ocean kayak guide for a large outdoor corporation in Maine. For 30 years, I have been volunteering in maximum security prisons, helping inmates with literacy, developing of the spiritual side of personality, and learning mature social skills - all to eventually assist with their future re-integration into society. My wife and I have 2 adult children, currently live near the New England coast and are avid sea kayakers.
View all posts by hamiltonstation →
This entry was posted in Sea Kayaking. Bookmark the permalink.